We were are all looking forward to this annual matchup between the Shipley Gators and Riverview Rams, especially 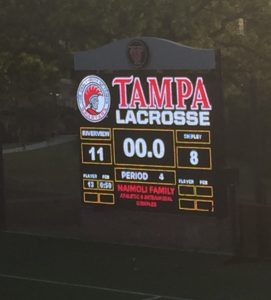 this year, as the game was played at the University of Tampa.  And like last year, the game was a four-quarter battle, with the scored tied entering the final quarter, 8-8.  As a result of some key saves by goalkeeper, Conor O’Neil and a tenacious defense, the Rams were able to shut out the gators in the final 12 minutes, and pulled away with an 11-8 victory at Naimoli Field.

Junior Josh Clark led the scoring with 4 points (1G and 3 Assists) and Senior Clark Flessner had 3 Goals and 4 groundballs, including one he took coast-to-coast for a score.  Evan Goff picked up another 3 points with a goal and two assists.   Reed Windom and Peter Giannone also picked up 2 goals apiece. Finn Johnson contributed 2 points with a goal and an assist.  Conor O’Neil had 27 saves in goal, setting a new Rams record.

Founded in 1894, the Shipley School is a private, coeducational day school for pre-kindergarten through 12th grade students, located in Bryn Mawr, PA.  The team is led by head coach and school Athletic Director, Mark Duncan.

A big “Thank You” to the University of Tampa Athletic department for opening up their amazing facility for this game.