The Riverview Rams Varsity Boys (6-2) traveled a couple exits north to take on their long-time rival, Out-of-Door Academy Thunder (2-6) on Friday night.  The game remained fairly close through the first half, with the Rams holding a 10-7 lead going into halftime, but an 8-goal, 3rd quarter by the Rams put the game out of reach for the Thunder, and Riverview went on to secure their fifth win in-a-row, 22-11.  Twelve different Rams contributed to the scoring, with sophomore JC Fleming leading the Rams with 8 points (3G/5A). Seniors Ken Kaiser* and Kevin Southerland followed up with another strong game, each picking up 6 points, with 4 goals and 2 assists apiece.  In addition to going 10-for-14 on face-offs, Solano Benitez scored 3 goals for the Rams.

* Senior Ken Kaiser’s 6-point game put him at 101 points for his career, moving him into the fourth spot on Riverview’s “All-Time Career Points” list, and second on the list in goals scored, with 77 career goals. Congratulations, Ken!

The Riverview Rams Varsity Boys got off to a slow start tonight against the Thunder, falling behind 4-3 at the start of the 4th quarter. Two quick goals by the Rams in the final few minutes of the game enabled Riverview to force OT, but the Thunder prevailed with a goal in the final minute of the OT.  ODA’s Luke Fenker had 5 saves in the fourth quarter, and 3 in the overtime.

Rams scoring was led by Blake Quigley with 2 goals. Sam Lehrman and Justin Clark also scored for the Rams. Tyler Horiuchi had the game-tying goal, as well as 7 groundballs and 3 takeaways. Ray Lefler had 6 groundballs.

The Lady Rams started their 2020 season with a huge matchup against the defending District Champions, Out-of-Door Academy Thunder.  The Rams lost to the Thunder in the 2019 District 17 Lacrosse Championship, 17-2.

It’s a new season, and the Rams got off to a very quick start, and were able to take a 10-5 lead in the first half.  During the second half, the Rams continued their offensive barrage and secured their first win of the season, 16-12.  Senior Gabriella Connelly led all scorers with 4 goals, 2 assists, 3 groundballs and 3 caused turnovers. Freshmen Camille Johnson had 4 goals and 1 assist. Clara Keyvani, Riley Spingler & Brooke Whitmore also had 2 goals apiece.

The Riverview Rams Varsity Boys team played their first “District” game against Out-of-Door Academy.  For the first three quarters, the game was reminiscent of the double-overtime thriller that was played between these two teams in the District 17 Semi-Finals, as the game remained tied, 10-10, going into the fourth quarter.   Five fourth-quarter goals by the Thunder secured the victory for ODA (15-11), their first win against the Rams since February, 2016. Outstanding play by Rams’s Senior Attacker Evan Goff who scored 3 points (1 Goal & 2 Assists), but also had 3 instrumental takeaways.  Senior Rhys McRobb had a great night at the faceoff circle, winning 15 of his 19 faceoffs.  Spencer Brooks, Peter Giannone and Dusty Hibbs contribute 2 goals, apiece.

This was the first of two regular season meetings, with the Rams hosting ODA on March 13.

Riverview Rams… Congratulations! This one is yours!

Did you seriously just walk onto the field after being down at halftime …by 2 Goals …to the Out-of-Door Academy THUNDER? … On their Home Field? …and walk away with a victory? …WOW!

For those of you not ‘in the know’… The ODA Thunder represents women’s lacrosse with a high level of professionalism and skill. Tonight’s game demonstrates just how far Coach Ashley McLeod has taken the team in a remarkably short period of time. Not only did the Rams stick to the basics but they demonstrated patience and control of the clock. This may be the first time we have seen the Lady Rams utilize their passing skills to effectively stall the clock while holding onto their lead for approximately three and a half minutes remaining in the game. If I am incorrect, it IS absolutely the first time they were able to utilize an effective stall strategy vs. such an ominous opponent. GO RAMS!

In order to place themselves into the position of holding onto a lead, our athletes held firm during a first half where  the THUNDER won the opening face off and scored 0:11 seconds into the game. The Thunder maintained that lead throughout the first half. The Rams tied the score once on a goal by Marisa Souchak with 13:32 remaining in the first half. However, the idea that a Rams victory could be achieved sparked a recovery attack by ODA ultimately leading to the 2 goal deficit at half time….

Then… the Cheerleaders arrived…

The Riverview Rams Men’s Lacrosse team began to initiate an excitement that swamped the stands and then the field when Ronni McCurdy opened the second half in a similar fashion to how the THUNDER opened the first half. Number 13 slid one past the Thunder’s exceptionally talented goalie just 0:14 seconds into the second half. This shot seemed to announce that the Rams were not simply ‘here to play’… They were here to WIN.

They obviously utilized advice from Coaches McLeod and O’Neill to remain patient and work through ODA’s zone defense that had proven very effective in the opening portions of the game. Our Rams fielded ground balls, checked sticks and intercepted passes… they even drew a charging penalty… effectively demonstrating their will power to STAND THEIR GROUND. In the end, they demonstrated a reason to cheer and the Men’s Lacrosse Team fed off their LIGHTNING and reflected that power back to the field in a form of RAMS THUNDER which has to be heard to be truly appreciated! THANK YOU RIVERVIEW MEN!

On the field the numbers are simple… ODA controlled the ball on the draws but by recovering 29 ground balls our Lady Rams showed no quit! We tied the game with 20:52 remaining and never looked back!

This game was all about team work! Therefore, honorable mentions will be excluded, as the stats have been recorded. This is a team that has a mark of success due to it’s great combination of determination and collaboration.

When it comes down to it. No one was certain of tonight’s challenge but it seems the girls were able to reach deep down inside and ask a very specific question… one I feel they answered…

“Who do you think you are?” ~ Imagine Dragons

It was a slow start for our Rams in tonight’s loss to Out-Of-Door Academy who scored 3 quick goals in the 5th minute of the game..  That minute haunted the Rams for the remainder of the game as they were continually battling back from the deficit it created.

Our girls did step it up in the second half out-scoring ODA 10-7. This surge was led by Lauren Brown who took 10 draws in the half (which is the exact number of draws we won in the half. Three were won directly by Brown, five were won by Veronica McCurdy… and two more by Marisa Souchak) In fact for a short run there when it appeared the Rams were about to take control there was a magical combo of “4-13-25 (Brown to McCurdy to Souchak) for the goal!”

In the end, McCurdy and Souchak combined for 12 of the Rams 17 Goals. Lauren Brown, Eden Byholm and Kate Zoltak rounded out the scoring… but the most important goal of the night came from Chloe Keegan who marked her first check in that category… EVER!

You read it here first ladies and gentleman, Chloe Keegan reached the back of the net for the first time with 0:56 left in the first half… under the light of nearly full moon at Out-Of-Door Academy! GO CHLOE! 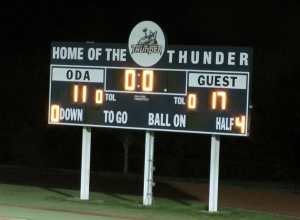 In the first matchup between these two teams in 2016, ODA’s Ian Martin scored a school-record 10 goals to lead the Thunder to a win over Riverview, 12-8.  At the beginning of the first quarter in this first 2017 Season matchup, it seemed like Deja-Vu, as Ian Martin scored three out the Thunder’s five goals to take an early 5-3 lead. As the game progressed, Riverview tied it up and then pulled away from the Thunder in the 3rd quarter, with a five goal lead.  ODA trimmed the lead to two goals with just under six minutes left in the 4th quarter, but the Rams scored two short-handed goals to put the game out of reach.  Excellent work by Rhys McRobb on faceoffs, our entire defensive unit for making the necessary in-game adjustments, our tenacious Middies, our patient Attack, our sure-handed Goalies and to our entire coaching staff. The Ram scoring was lead by Seniors Jesse Clark with five goals and three assists, Cole Hautamaki, four goals and an assist and Sophomore Spencer Brooks with three goals and two assists.

The Bradenton Herald has an interesting article and video on ODA’s Varsity Lacrosse team, where the team states their main objective is to beat Cardinal Mooney this season and win the District Championship.  After tonight’s game against the Rams, they might need to add another team to beat in order to reach their objective.  Check out the article here:
http://www.bradenton.com/sports/article131116704.html

SARASOTA — Ian Martin scored a school-record 10 goals to lead Out-of-Door Academy to a win over Riverview in the season opener.  Clark Flessner led the Rams with two goals and two assists. Jesse Clark, Cole Hautamaki, and Spencer Brooks had two goals each and Max Drewitt was a standout on defense.