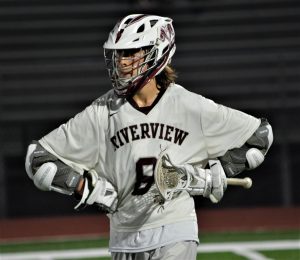 The Riverdale Raiders (5-3) made the trip up from Ft. Myers for a District matchup against the Rams (8-2) in the Ram Bowl.  This game turned out to be a difficult mismatch for the Raiders, as 14 different Rams scored goals to secure the 25-2 win, and kept the Rams undefeated in the District (4-0).

RECORD SETTING NIGHT FOR TWO RAMS!
It was a day of records for a couple players, as well.  Freshman JC Fleming scored 8 goals, breaking the single game record held by Jesse Clark (2017) who held the previous record of 7 goals in a game (3/25/2017 vs. Shipley, PA).  In addition, Senior Defensemen Kai Hudson, who was just crowned “All-Time Career Ram Takeaway” leader (76) during his last game against Cardinal Mooney, added to his resume by collecting 7 groundballs in this game, making him the “All-Time Career Ram Groundball” leader with 138, as well.  For the complete list of Riverview Rams Records, visit our Riverview Rams Record Page.

Graeme Williamson and Cole DeVore each scored a goal for the Raiders.