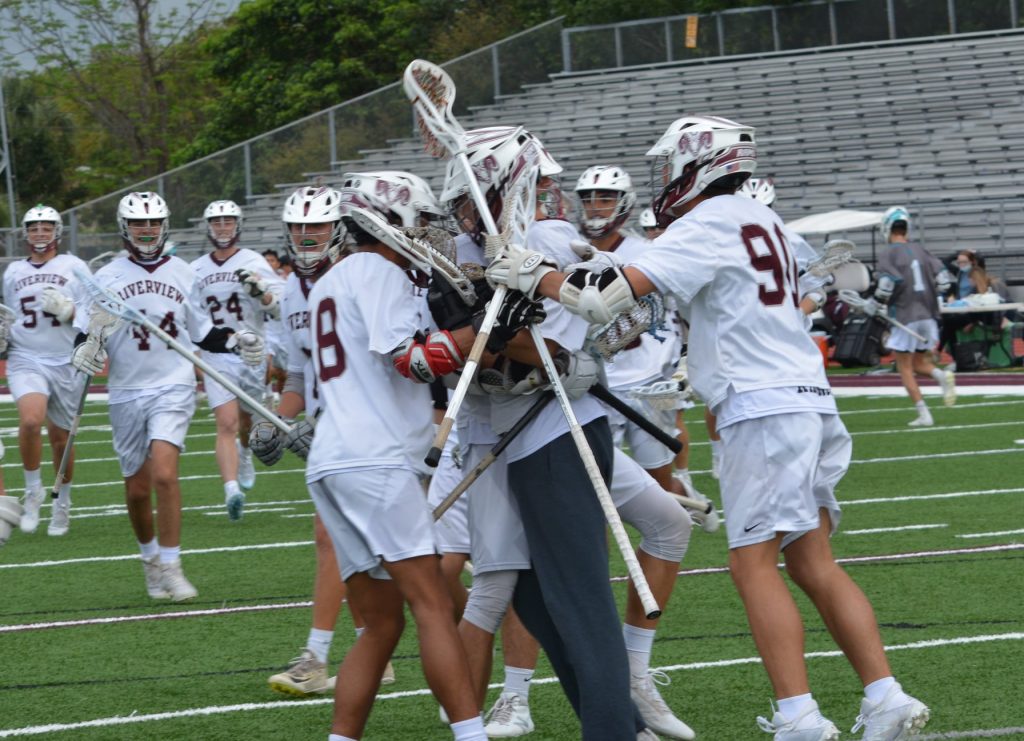 The Riverview Rams Varsity Boys (5-0) remained undefeated, with a huge district win against the previously undefeated Gulf Coast Sharks (4-1).  The Rams jumped out to an early 3-0 lead in the first quarter and never trailed for the remainder of the game.

With 9:12 remaining in the the 4th quarter, the Sharks cut the Rams lead to one on a laser shot by McLain, 8-7, but Riverview answered with another goal within 6 seconds after Senior Tyler Horiuchi snagged the ground ball on the face-off, fed it to Junior Dylan Alexander, who quickly passed it Sophomore Minford, who snapped it to a wide open Ken Kaiser who double-pumped his shot and slipped it past the Shark’s Shields for the score.  That perfectly executed goal was a precursor to the Rams scoring 4 goals in-a-row before the Sharks’ Babb picked up a loose groundball in front of the net and scored their last goal with 3 seconds remaining before the final horn.

The Rams scoring was lead by Will Evans with five points (3G/2A) and Ken Kaiser with four goals.  LSM, Tyler Horiuchi had a great game across the entire field, securing 6-out-of-7 faceoffs, as well as forcing 2 turnovers, picking up 7 groundballs and scoring a key 4th quarter goal.  The Sharks came into the game averaging 17 goals per game, but the Rams’ defensive personnel did a solid job limiting Gulf Coast to only 6 goals when the teams were at even strength.

Chris Johnson had 11 saves in goal for the Rams.

One historic notable occurred with 1:06 remaining in the 1st quarter, when Senior Blake Quigley scored the Rams third goal of the game.  This goal was the 1,000th “team” goal in Riverview’s program history.  Congratulations to Coach DeLisser and all the Ram players, past and present, that contributed to this accomplishment.